Home Editorial: The Hustler Casino “Cheating” Allegations Much Ado About Nothing? 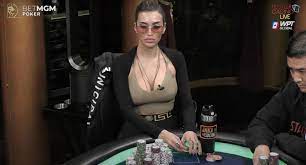 There have been plenty of times when cheating in poker has occurred. The Russ Hamilton-led Ultimate Bet Superuser scandal is one particular moment that comes to mind, and the Mike Postle Stones Live situation has never been fully explained. Add into that the history of cheating in the game of poker – the usage of ‘shiners,’ marked cards, or special ink visible only by wearing a certain color sunglass. But an incident occurred in a live streamed event recently that people are being very quick to accuse as cheating instead of the much more likely situation that it was just a bad play.

Once again, the streaming program Hustler Casino Live is the battleground for the latest accusations of cheating. If you will remember, the streaming program was the site of a cheating allegation earlier this year when a player was sneaking a peek at the hole cards of another player at the table. This allegation, however, does not seem to have much evidence to it and more like sour grapes from the person who tried to make a move.

The hand went down as such.

Garrett Adelstein, who is a notable player on the Hustler shows, was in a $100/$200 cash game with some players who were not otherwise notable. Holding an 8♣ 7♣, Adelstein raised out of the THIRD blind (indicative of the action), while a player by the name of Robbi Jade Lew made the call on the straddle with a measly J-4. A 10-10♣ 9♣ flop hit the felt, giving Lew absolutely nothing and Adelstein the world.

Adelstein acted like he was holding the nuts, powering out a bet of $2500 and Lew looked him up. A trey on the turn did nothing to help – nor hurt Lew’s leading hand, it must be noted – but Adelstein put out another bullet of $10,000. Lew pushed a bit here, min-raising the pot to $20K, and Adelstein tried to buy his way out with an all-in move for over $100,000.

Many viewing the stream felt she should have folded, but apparently Lew was not going to be bullied off the pot. She made the call and, with her Jack good, only had to fade every other club in the deck, any Jacks, sixes, eights, and sevens, to be able to take the monstrous $269,000 pot. The two players decided to run it twice and both times the river blanked, giving Lew the full $269K pot.

Adelstein immediately began to whine about losing the hand, badgering Lew about the bad call and why she made the call. And the internet went nuts.

Anyone Ever Hear of Occam’s Razor?

The accusations immediately began to fly that Lew had “cheated” to win the hand – without anyone producing a method for Lew to have cheated. Admittedly Lew did not make it look good, either; Adelstein and her stepped away from the felt during the livestream and Lew, for some unexplained reason, gave the whiny Adelstein $100K to try to diffuse the situation. But there was absolutely nothing evident that Lew had done anything wrong other than maybe make a horrifically bad play that worked out for her.

There is a principle called Occam’s Razor that states that no more assumptions should be made than are necessary to explain a situation. The problem with saying that Lew “cheated” is that you therefore must produce more assumptions about how she did it. Occam’s Razor dictates that the simplest explanation – that Lew made a bad call – is the most logical one; that she was rewarded handsomely for that bad move is immaterial.

These types of plays happen all the time on the poker tables. Usually, it is the testosterone driven males who make these moves and then bray about them, rubbing it in the face of their opposition. Lew is a woman, who is not expected to make moves like this – is this simply a factor that people are making accusations against Lew because she is not male? She should not be capable of making such moves? If this is what the poker community thinks, then a massive brain transplant is necessary for many people.

Lew’s poker skills, even by her admission rudimentary, did not stop her from stepping to that table on Thursday night. It did not stop her from playing in a big game. And it should not have ruined what was a good moment for her in calling down a player she thought was trying to push her around. Take the gender out of it, say that it was Tom Dwan in the seat, and suddenly everyone is gushing about how great a call it was.

This entire situation reeks of sexism, putting Lew down because she is not the right gender to have dropped the hammer on Adelstein (quite honestly, he should be giving the $100K BACK to Lew because he was beat fair and square). And how much longer is the streaming poker world going to exist if EVERY. DAMN. TIME. something “happens that shouldn’t” people scream for a federal investigation of the issue? Eventually these shows will say, “You know, it’s not worth the headache to have everyone watching every nervous tic of the players…we quit.”

The entire Lew/Adelstein situation is complete garbage. She beat him, fair and square. As ‘Teddy KGB’ noted in Rounders, “NYET! (She) won fair and square! Pay that (wo)man her money!” Additionally, the poker world just needs to back the hell up with the continuous accusations – let the players on the felt police the situation, not those watching a live stream several thousand miles away.