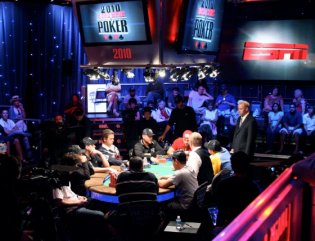 Day 3 of the World Series of Poker Main Event kicks off at noon PST Thursday, and for the first time ever poker fans will be able to watch the action in near-real time. ESPN will be providing tape-delayed coverage of the tournament for the next six days — until the November Nine is set — on ESPN 2 and ESPN3.com.

The network will air more than 35 hours of the Main Event between July 14-19 as the starting field of 6,865 trims down to nine. There are currently 1,864 players still vying for the $8.7 million first-place prize. The 30-minute delay coverage on ESPN2 (and simulcast on ESPN3.com) will only include hole cards after the flop. There will be two feature tables, and coverage will shift between the tables every 30 minutes. However, any “all-in and call” situations on the outer table will be included in the broadcast.

“This is a historic milestone for ESPN and the WSOP,” WSOP executive director Ty Stewart said in a press release. “The addition of live event-style coverage with hole cards in July and primetime shows leading up to the crowning of a champion in November provides our fans more access than ever before, and we are extremely proud to be with a company dedicated to realizing the potential of the game.”

Lon McEachern and David Tuchman will handle the play-by-play duties of the telecasts, with poker pros such as Phil Hellmuth, Antonio Esfandiari, Olivier Busquet, and Brandon Adams rotating into the commentary booth to provide analysis. The lovely Kara Scott will be reporting from the sidelines.

The live coverage will pave the way for ESPN’s regular Tuesday night WSOP telecasts, which begin July 26 and run weekly until a main event champion is crowned Nov. 8. McEachern and Norman Chad will remain hosts of the coverage on ESPN.

While the new same-day coverage is exciting for poker fans, there have been some concerns from some players regarding the security involved in the broadcast for such an important tournament. Because the action is only 30 minutes behind, players could potentially have friends “scout” opponents and provide useful information that they wouldn’t normally have.

ESPN has assured everyone that it has taken extreme measure to ensure that players will be protected from any dishonest behavior. Stewart said the Players Advisory Council and the Nevada Gaming Commission were consulted as the coverage plan was put together. One major rule set in place is that there will be no cell phones or PDAs allowed in the sequestered area. That goes for players and the ESPN staff.

“All of those folks who have access to the hole card feeds have been background checked and approved by gaming, and there will be heavy security and surveillance,” Stewart said.

Here’s a look at the complete WSOP Main Event schedule on ESPN (all times Eastern):