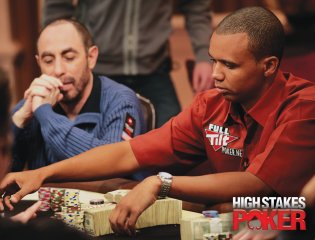 In breaking news from Las Vegas, the seventh season of “High Stakes Poker” will tape from November 18th to 20th, as GSN has given the green light for the newest installment of the cash game poker franchise. The location, time, air date on GSN, and players involved have not yet been announced, but poker fans can rest easy tonight knowing that “High Stakes Poker” has been renewed for another cycle.

EDIT: Several weeks after this article was published on Poker News Daily, GSN officials revealed that the taping of “High Stakes Poker” Season 7 will actually occur in December 2010. No reason was given for the change.

On the fleet of poker pros that could assemble for the show, a representative from GSN told Poker News Daily on Friday that the network expects to have “another great cast of world-class players this year.” Five players have appeared on each season of “High Stakes Poker” to date: DoylesRoom front man Doyle Brunson, Eli Elezra, Victory Poker’s Antonio Esfandiari, PokerStars front man Barry Greenstein, and “Million Dollar Challenge” icon Daniel Negreanu.

The premiere of “High Stakes Poker” Season 6 was quite buzz worthy, as UB.com pro and 11-time World Series of Poker bracelet winner Phil Hellmuth went broke after dropping $200,000 in the blink of an eye. Hellmuth quickly shipped $50,000 to Ivey before committing his remaining stack on a board of 6-4-7-K with two hearts holding J-5 of hearts for an open-ended straight draw and a flush draw. Ivey held K-9 of hearts for top pair and a better flush draw and declined to run the river more than once. The final card filled the eight-time bracelet winner’s king-high flush and, just like that, Hellmuth was broke.

Prop bets were also discouraged last season. Prior to taping Season 6 of “High Stakes Poker,” Esfandiari, the ringleader of prop betting on the show, told Poker News Daily that he had been asked to curb his pastime: “The prop bets where people would guess cards, for example, they’ve been trying to get rid of that. [Executive Producer Mori Eskandani] is trying to steer towards less betting at all. The bottom line is that he doesn’t want viewers at home to be bogged down with players prop betting in addition to poker.”

The PokerStars-powered “Big Game” has recently filled the void between seasons of “High Stakes Poker.” The “Big Game” airs late nights on FOX and features a variety of pros battling with an online qualifier dubbed the “Loose Cannon.” The “Big Game” has a $500,000 maximum buy-in and has featured a variety of pros including Negreanu, Justin Bonomo, David “Viffer” Peat, David Williams, and 2005 Main Event champ Joe Hachem. It’s played in a ring game format with $100/$200 blinds.