Home Maria Konnikova’s “The Biggest Bluff” Excellent for Your Mindset, Poker and Otherwise 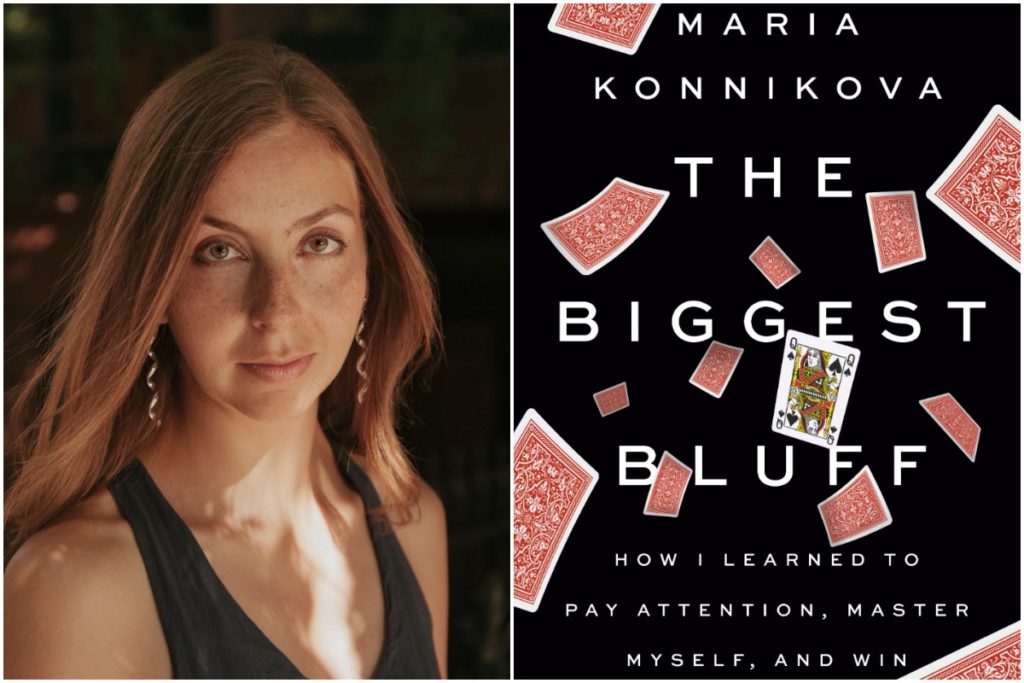 There are several segments of the poker literary genre if you look at it honestly. There are the hardcore strategy books that will tell you exactly when the right time is to bluff with that 7-2 off suit in a major cash game. There are the biographies and the autobiographies that take us into the lives of some of the greatest characters the game has to offer. Then there’s the books that help our poker mindset, which get us into the position for success. Although there are some points where she might have wanted it to be a self-help book, psychologist/author Maria Konnikova’s latest effort, The Biggest Bluff, falls into this final category and is well worth your time.

Learning at the Feet of Legends

Konnikova finds herself at a difficult moment in her life when she has a wild idea: learning about the game of Texas Hold’em poker, with the end goal of playing in the World Series of Poker Championship Event. As an academic, she knows that she needs to find the best people to learn the game from, and she doesn’t go for just anyone. In the early parts of The Biggest Bluff, Konnikova pulls off perhaps her greatest play of any in the book regarding the poker world – enlisting the teaching aid of eight-time WSOP bracelet winner and Poker Hall of Famer Erik Seidel.

After thinking that he would laugh her out of the building with her request, Konnikova catches Seidel’s attention and, taking on the challenge, Seidel goes about teaching the psychologist about the mysteries of poker. He first sets Konnikova up with speaking to another legend of the game, former World Champion Dan Harrington, and the two masters of the game help to shape Konnikova’s approach to poker.

Before even teaching Konnikova about complicated plays and wizard-like bluffs, the two men teach Konnikova arguably the toughest thing about the game, the mindset. Konnikova learns from working with these two champions that there is more to the game than the cards, something that we tend to forget as we get further down the road in the game. Because of her unique approach as someone who doesn’t have any poker knowledge in her background, Konnikova is a perfect “blank slate” (a term she readily uses to describe her skills in the game) to be able to strive to poker greatness.

From a Rookie to Poker Champion

The Biggest Bluff is one of the few books that entertained me all the way through without having one iota of poker strategy discussed in it. Through the pages, Konnikova slowly graduates through the stages that Seidel has set for her – online cash games, then tournaments, a charity event, then live poker tournaments – and, while she doesn’t excel at every step, she learns the important things that both Seidel (and Harrington) want her to learn – to make each decision separate of anything previous or afterwards, to fully understand what she needs to do at all points in whatever game she’s playing, to make the correct decisions regardless of being right or wrong (something that poker players frequently forget). It pays off for Konnikova in the end.

The stories of Konnikova making her way through the casinos of the world – Monaco, Macau, tournaments around the world – and how she overcame her dislike of these entertainment establishments are quite well told and entertaining. But the best stories are of her victory at the 2018 PokerStars Caribbean Adventure, which ended with her winning the National Championship event, and her journey to the World Series of Poker – which…well, we should let you read.

It should come as no surprise that Konnikova was able to put the teachings of some of the greatest minds of the game to good use. As a psychologist, she has broken down the workings of the mind of Sherlock Holmes (Mastermind) and why we fall for shady operators and their sometimes illegal and illicit plans (The Confidence Game). With The Biggest Bluff, Konnikova seems to have given the best gift to the reader of all three books – the ability to be an excellent thinker, able to dissect life’s situations and make the best decisions possible and under the most difficult conditions.

Konnikova has come up with a book that is not going to teach you anything about poker strategy, at least in the card sense. What it is going to teach you about is the ability to honestly look at yourself, your mindset and how you approach situations. This book isn’t strictly about the poker table, either; it is a book about improving yourself, which Konnikova finds as a delightful extra that she receives from her studies at the School of Seidel. If your needs in poker are in the mental execution arena, then Konnikova’s efforts will be beneficial to you. If your needs are in the area of improving yourself, you would be well advised to follow Konnikova’s efforts in The Biggest Bluff.