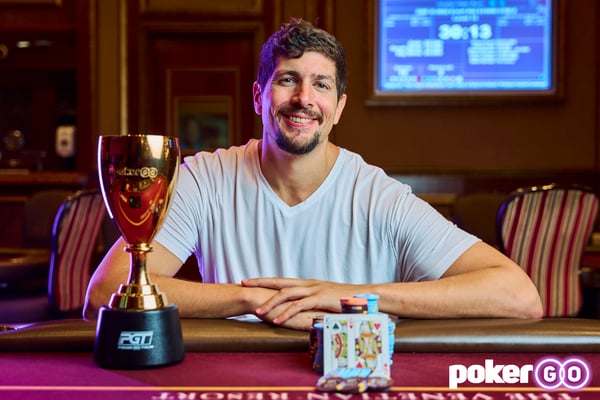 There’s no way to sugarcoat this – the Stairway to Millions II is NOT doing very well.

Event #9 of the Stairway to Millions II at The Venetian in Las Vegas had everything going for it. A $10,000 buy in tournament, a two-day schedule (meaning plenty of time for play), and the opportunity to earn entry into Event #11 of the schedule, the $25,000 No Limit Hold’em tournament prior to the Main Event. In the end, the tournament was wrapped in one day, a miniscule number of players turned out and only three men would take away cash, including eventual champion Michael Rocco.

18 Entries – Yes, You Read That Right

Perhaps the staff at The Venetian and the PTBs at PokerGO saw the writing on the wall from the start of Friday’s action. When the cards hit the air at 3PM (Pacific Daylight Time), only EIGHT players were in attendance at the table for a $200,000 guaranteed tournament. That number quickly became seven as Chance Kornuth bit the dust (but reentered) after Jeremy Ausmus hit a set of fives and turned a boat against the trip nines of Kornuth.

Play moved into the early evening hours but the players just didn’t seem to come out at any point. Sam Soverel roared out of the gate, only to run into a very fortunate Rocco when Rocco turned two pair against Soverel’s pocket Kings to eliminate Soverel. Cary Katz would be eliminated but jumped back in for another double entry in the tournament.

Rocco, meanwhile, continued to mow down the opposition. He was responsible for the departure of Adrian Mateos, who reentered, but even with Mateos back in the game the Event #9 numbers were dismal. A total of 18 entries (and we’ve annotated the multiple entries that were noticeable), came in, providing for a prize pool of only $180,000 that three players would take part in.

By the time the dinner break came, Mateos’ second bullet was done and only five men were left on the table. With two more knockouts to the cash, Rocco wasted little time in dumping Jeremy Ausmus from the festivities. On the money bubble, it was Adam Hendrix who ended the night of Francis Anderson in fourth place, good for absolutely nothing.

Rocco led with three players to go, holding more than half the chips in play. He knocked off Katz in third place, who earned $24,700 and the seat to the $25K event that begins tomorrow. Holding a million more chips than Hendrix, Rocco would never let him in to the final table play. Rocco would dust Hendrix off in just over an hour, taking the first-place prize and the $25K seat.

ANY Chance the Big Money Tournaments Will Be Bigger?

Needless to say, the dismal performance, especially in these later tournaments in BOTH Stairway to Millions competitions, are going to send the minds at PokerGO scrambling back to the drawing board. The channel, and its fledgling PokerGO Tour roster of events, has shown better success when they hold their “High Roller” tournaments as a part of an established (RE: World Poker Tour/World Series of Poker/European) schedule. When they stand alone, these tournaments have difficulty in drawing in players. What the PTBs at PokerGO decide – continue these tournaments or scale back – could determine whether there is a Stairway to Millions III.