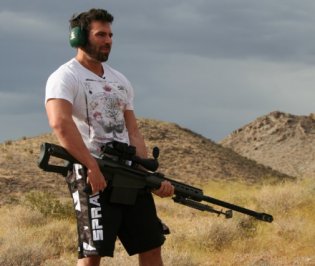 Simply amazing. We live in a world where that happened.

That’s not new news. It happened on April 23rd. If you’re reading this article, you’ve probably seen the video: the hulking Bilzerian held the nude Janice Griffith, one hand on her side, the other on her nethers, and heaved her over the edge of the roof to the swimming pool, one story below. He knew right away that he didn’t get enough strength into the toss, as he let an expletive fly as Griffith went airborne. She did land in the pool, but her foot hit the concrete first.

It now appears that Griffith wants to be compensated by Bilzerian for her troubles and Bilzerian will have none of it.

Griffith hinted at possible legal action a couple days after the incident in an interview with TMZ. When asked if the roof toss was part of the shoot or just goofing around, she said she couldn’t answer that. As that quite obviously sounded like advice from her lawyer, the interviewer followed up with a question as to whether or not she has retained legal counsel. She replied, “I am still sorting everything out. I can’t really go into details. My main concern is just getting back to work because I’ve had to cancel a couple of scenes because of this broken foot.”

It certainly sounded like she was planning to sue and now it seems as though her counsel has threatened legal action. Evidence of this comes in the form of a letter that Bilzerian’s attorney, Tom Goldstein, sent Shoham Solouki, Griffith’s lawyer. The letter, acquired and made public by TMZ, oozes disdain and sarcasm with virtually every word. Goldstein tells Solouki that Griffith was under contract with Hustler and agreed to the stunt.

“In all events, she agreed,” Goldstein said. “Very few people I know would make that choice. But there it is. And chronologically, she’s an adult competent to make it. Hustler and your client asked Mr. Bilzerian to be the thrower, and we can all agree that was the better end of the deal.”

Goldstein also notes that Griffith may have been the one most at fault, as she grabbed Bilzerian’s shirt as he threw her, an act that very likely may have caused her flight path to be altered.

Goldstein closes the letter in a way that leaves little open to interpretation, “If she sues, the complaint will be sanctionably frivolous. Your client should just box up almost every last bit of her property (please exclude all videos and photographs, as well as the seemingly inevitable small yappy dog) and drop it off with you in safe¬keeping for Mr. Bilzerian. After he receives the judgment in his favor, he will have it all delivered to him. Then he will probably blow it up with a mortar in the desert.”