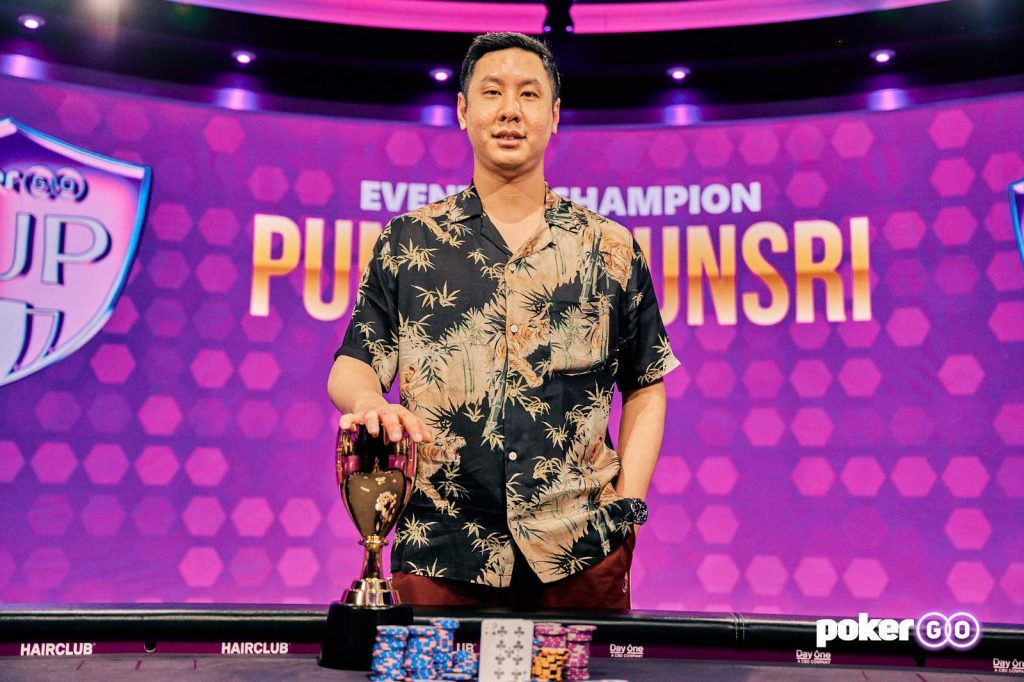 It was a busy Thursday around the PokerGO Studios in Las Vegas. Punnat Punsri was able to defeat the two Daniels, Colpoys and Negreanu, to take down Event #7 and book a mid-six-figure win. While that was going on, the Main Event of the 2023 PokerGO Cup, the $50,000 No Limit Hold’em tournament, set up its final table and the battle for the series championship.

31 entries were received for the penultimate event in the 2023 PokerGO Cup, meaning that only five players were going to get a payday from the affair. Those five men were in attendance on Thursday afternoon, with David Peters holding a slim lead over Negreanu and Colpoys at the start of the action. For his part, Punsri was looking up at everyone, the short stack at the final table with a still viable 570,000 in chips.

Negreanu drew first blood at the five-handed final table, knocking off Sam Soverel from behind. The money went in pre-flop and Soverel looked to be in decent shape for a double-up with his Big Slick, but Negreanu’s Big Chick (A-Q) caught a Queen on the turn to take over the lead. Once he was able to dodge a King on the river, Negreanu scooped the pot and Soverel hit the rail in fifth place.

Punsri got into the action soon afterward. Peters did not take advantage of his start-of-day chip lead, bleeding chips throughout the early action. It finally reached the point where he was all-in and at risk against Punsri in a blind-versus-blind situation with a less-than-optimal holding. The Jack high board didn’t hit anyone, so Punsri’s K-Q off suit was better than Peters’ Q-6, with the result ending Peters’ tournament in fourth place.

Now 1-2 on the leaderboard, Punsri and Negreanu did not shy away from taking each other on, and it would cost one of them his tournament life. Negreanu made a raise off the button and Punsri, in the big blind, responded by moving all in. Negreanu was more than happy to dance, tabling his A-Q, while Punsri opened a respectable A-10 for the battle. In the window was the ten that Punsri was looking for and, after no lady came to aid Negreanu’s efforts, he was out in third place.

For his part, Colpoys did not go silently into the Vegas night. He battled hard against Punsri but thought Punsri was bluffing at the wrong time to shift most of his stack to the man from Thailand. On the final hand, the duo would see a J-8-2-2-4 board and, after Colpoys tried to value bet the river, Punsri moved all in. Colpoys thought that it was another bully move, but it wasn’t; Punsri turned up a J-9, good for Jacks up, while Colpoys could only muster a 10-8 for a lesser eights up two pair to end the tournament.

The final event of the 2023 PokerGO Cup, the $50,000 Main Event, usually is the tournament that determines the overall champion of the series. This year, however, there was a caveat put in place that required a player to have at least one other cash in the series to be eligible. Thus, pretty much every player who came to the felt for the finale had a chance at taking home the overall championship.

Two tables were open for play at the start and there was not a weak spot anywhere. Current PokerGO Cup leader Anthony Hu was with two of the other champions from the 2023 run, Sean Winter and Alex Foxen, while Adrian Mateos had to contend with Freddy Deeb, Nick Petrangelo, and Nick Schulman on his patch of felt. Peters came to the game after his elimination from Event #7, as did Negreanu and Punsri.

After 26 entries were received for the tournament, it was determined by PokerGO Tour officials that the Final Four would be the players to receive a payout from the tournament. Once that announcement was made, the players took a different tack to the event, with each elimination ending the tournament – and the dreams of the PokerGO Cup – of the departing contestant. Kisacikoglu, Schulman, and Soverel all fell victim to the cards after the payout announcement.

Play would last into the early morning hours of Friday (just after 4 AM) before the final knockout was made and the Final Four determined. Katz would call off the button and Brian Kim, in the big blind, responded by pushing the remainder of his stack to the center. Katz was ready for him with the call, flipping up pocket Aces to battle Kim’s K-10 off suit. Although the J-9-7 flop brought more outs for Kim, neither running Kings, a Queen or an eight came to the rescue to end his tournament on the money bubble.

Here are the scenarios for the overall PokerGO Cup championship.

Anthony Hu holds the overall lead currently and either Katz, Colpoys, or Winter can pass him if they win the championship. Katz does not have to win, but he would have to finish runner-up to Haxton to be able to garner enough points to knock off Hu. Haxton does not have a shot at the overall PokerGO Cup championship because he has not cashed in another event on the eight-tournament schedule.

Each player is guaranteed a $130,000 payday, but the $598,000 that goes to the eventual Main Event champion will be what all are shooting for. There is also the decision to make regarding the PokerGO Cup and its $50,000 bonus. These decisions will all be made beginning at 2 PM this afternoon (Pacific Time) in the PokerGO Studios and will be live-streamed on PokerGO on a one-hour delay.