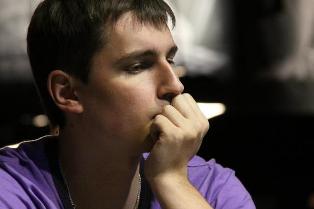 Russia’s Viacheslav Zhukov entered the $10,000 Omaha High-Low Split Championship this week as one of only a few unfamiliar faces in the tournament. But the 22-year-old poker pro, playing in his first World Series of Poker, never felt threatened playing in one of the most star-studded fields of the WSOP.

Zhukov bested 201 talented players in Event #11 to capture his first ever bracelet Thursday evening. It was also his first cash, as the Russian Pro was unable to play in the WSOP last year because he was studying at Moscow Mining University.

Zhukov’s path to victory certainly wasn’t an easy one. Among the foes he had to face at the final table were Mikael Thuritz, PokerStars Team Online member George Lind III, and WSOP bracelet winners Steve “MrSmokey1” Billirakis, Richard Ashby and Josh Arieh.

Play began Thursday with only three players competing for the bracelet as the WSOP’s hard stop rule ended play the previous night. Lind held a chip lead over Zhukov going into the day, but the Russian picked up momentum by sending home Billirakis in third place within the first half hour.

That left the remaining two players nearly even in chips when heads up play began. Lind took an early lead, but Zhukov chipped away at his opponent for nearly three hours before making a wheel on the final hand to send Ling to the exit with $287,554. Zhukov earned the biggest score of his career by earning $456,216.

Here’s a look at the final table results of the $10,000 Omaha High-Low Split Championship:

While the Russian’s unanticipated conquer of that tournament was impressive, the most uplifting story of the day came in Event #12, the $1,500 No Limit Hold ’em Triple Chance. That’s where a 26-year-old cancer survivor defied the odds to realize his dream of winning a WSOP bracelet.

David Diaz captured the hearts of those in the Rio late Thursday evening. At the age of four, Diaz was diagnosed with the worst of all diseases in his home of Honduras, and his family didn’t have the money to pay for proper treatment.

But the St. Jude Children’s Hospital came to the rescue and moved Diaz from Honduras to Memphis, TN to take care of him for free. And, 22 years later, the self-proclaimed “grinder” did the unthinkable by beating a field of 1,340 players to collect WSOP gold and a payday of $352,808.

Diaz defeated Anders Meli heads-up for the title and also denied Team PokerStars Pro Bill Chen his third WSOP bracelet by eliminating him in fourth place. Chen had several pros in his cheering section during the final table, but none could call the final result disappointing. It’s stories such as this one that makes the WSOP such a special event.

Amazingly, all 12 champions so far at the 2011 WSOP are first-time bracelet winners. But that could change on Friday. A bevy of WSOP champions have reached the final day of the $1,500 No Limit Hold ’em Shootout, including Vitaly Lunkin, Dan Kelly, David Pham, and 2010 WSOP Player of the Year Frank Kassela. All of the remaining 16 players won their first two tables, and they’ll each begin with 450,000 chips when play resumes at 2:30 p.m. local time. A first-place prize of $369,371 will be up for grabs.

Stay tuned to Poker News Daily for continuous coverage from the 2011 World Series of Poker.