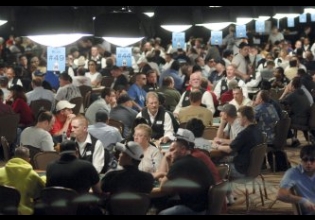 The World Series of Poker Main Event kicked off Thursday with 897 players participating on Day 1a, the first of four starting days in poker’s biggest showcase. The field was down about 20 percent from the 1,125 entrants that participated in 2010 — not surprising given the lack of online qualifiers from the major sites indicted by the Department of Justice on Black Friday.

The Day 1a chip leader was Fred Berger, who bagged 209,500 chips at the end of five levels Thursday night. The Las Vegas native took the lead in the final hour, winning a massive pot from former November Niner and bracelet winner Scott Montgomery. Berger had Jh-9h on a 8c-6h-2h-Js-Jc board, giving him trip jacks, and Montgomery was sent to the rail after he pushed all of his chips in on the river with two pair, jacks and eights.

Berger is no rookie at the WSOP; he has 13 cashes at the WSOP in his career, including victory in a $3,000 Pot Limit Hold ’em event in 2002. Berger defeated Chris “Jesus” Ferguson heads up for the bracelet and a prize of $197,400. In total, Berger’s live tournament cashes eclipse $1 million.

Four former WSOP Main Event winners took to the felt on Day 1a, including Doyle Brunson, who surprised many after announcing Monday that he would be sitting out the event. The “Godfather of Poker” apparently had a change of heart and took his seat at the ESPN Featured Table. By Level 3, Brunson had been chipped down to 4,375, and got the rest of his stack in preflop with pocket fives against the Ac-Qh of Steve Costello. The board ran out Ad-Qs-Jc-6d-2h, and Texas Dolly made his exit to a round of applause from those in the Amazon Room.

A total of 556 players survived the day and they will combine with the survivors from Day 1c to form the Day 2a field on Monday, July 11. The players that make it through Days 1b and 1d will form the Day 2b field, which will take place on Tuesday, July 12.

Day 1b gets underway Friday at 12:00 p.m. local time. Stay tuned to Poker News Daily for continuous updates from the 2011 World Series of Poker from the Rio in Las Vegas.